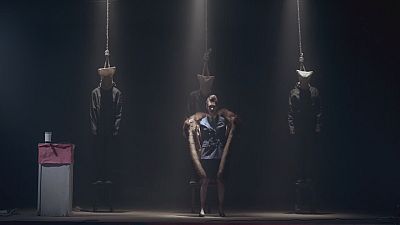 We'll bury alive anyone you wish. We'll find nice jobs in prison for anyone who's too smart. We look out for our own homies, you know...

In ‘Chaika’, the all-girl collective takes on the Kremlin and the criminal justice system. The song mocks prosecutor general Yury Chaika for alleged corruption.

Dressed in an altered government uniform, with epaulettes similar to the general’s, frontwoman Nadezhda Tolokonnikova accuses Chaika of the crimes he is supposed to contest.

Last December Chaika was the subject of a report by opposition leader Alexei Navalny which accused his family of mafia ties and gross corruption.

Pussy Riot does not expect a response from the Kremlin.

Pyotr Verzilov, the Russian-Canadian artist and husband of Tolokonnikova, said: “We definitely don’t expect a reply from the Kremlin, because the Kremlin chose to keep silent on this case and was silent since early December when this report was published; but we and everyone in Russia very much enjoyed a very artistic response that prosecutor general Chaika himself wrote via the newspaper ‘Kommersant’ in reply to Navalny’s report, where he went on to call up all these crazy accusations by saying that the report was founded by Bill Browder (William Felix Browder, CEO of Hermitage Capital Management and critic of Vladimir Putin), controlled by the CIA.”

And it was certainly the way and tone in which Chaika reacted to Navalny’s accusations that inspired the single’s lyrics.

He adds: “The tone of the letter really allows you to think that it’s not written by a member of the press office but actually by Mr Chaika himself, because it is very emotional and you can see that he just can’t keep control of himself, he is so enthusiastic about responding to Navalny’s accusations.”

The song, a musical change for Pussy Riot and complete with DJ scratches, pokes fun at Chaika’s patriotism, saying, “I love Russia/I’m a patriot/But I could live in Switzerland as well.”

Within a few days of its release the video had over a million clicks. The reaction has been mixed.

In 2012, Tolokonnikova and former band member Maria Alyokhina were convicted of extremism after staging a protest in a Moscow cathedral. The pair spent 21 months in jail and were later given amnesty.

Tolokonnikova said the video was a response to the way the government considers Russia an instrument to get rich.

Chaika has denied all the allegations against him.