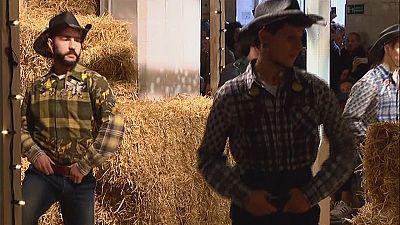 ‘Futuristic’ appeared to be the buzz word at the Emporio Armani menswear show in Milan.

Giorgio Armani sent out a team of skiers kitted out in tin-foil silver snow parkas, paired with swirling black, white and grey trousers.

More formal, double-breasted jackets were paired with fluid pleated trousers, while laser-cut squares and clusters of triangles created patterns that wouldn’t be out of place in space.

Etro took the Milan audience on a journey through the great outdoors, with a short film called ‘State of Nature’ opening the show.

Cashmere and wool jackets and sweaters were combined with suede trousers and oversized scarves, while patterns included plaid, check and bold stripes.

Prada told a mariner’s tale, with a seafaring theme coming across in next season’s looks.

The show had a sombre feel, with sturdy coats in black, navy, tan and white and weather-worn collars and lapels.

Trousers were cropped and cuffed, while Prada’s footwear had leather fringe.

The looks were topped off with sailor caps, key-chain clusters and square boxed purses tucked into the models’ pockets.

A fistful of Antonio Marras

Antonio Marras, meanwhile, continues to take inspiration from his native Sardinia. This season, he looks towards a small village where many of the seventies’ Spaghetti Westerns were filmed.

The cowboy theme was reworked to deliver a charming collection including tartan, floral patterns, leopard print, denim and leather.