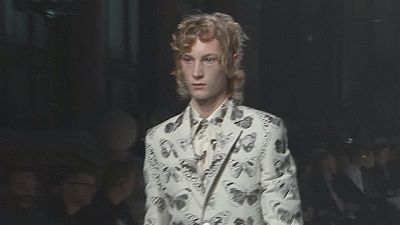 The first of this new year’s fashion weeks got off to a subdued start as the world learnt of the death of David Bowie.

“I guess the thing is for us is that we get to have his music forever. He influenced already three generations of musicians to whom he’s a hero. So I guess that is the one positive thing,” said recording artist Mark Ronson.

“He was himself. I think that has a lot to do with London as well, and just trying to experiment, you know, to experiment, that is what it is to be an artist, you have to experiment. You can’t be comfortable and safe. Sometimes the things you love you have to kill and he did it, time and time again,” said film director Steve McQueen (Twelve Years A Slave).

London Collection Men features the latest menswear collections from more than 60 designers including Moschino, Paul Smith and Burberry, which opened the show on Monday.

To a sorrowful live set by Franco-British poet and musician Benjamin Clementine, models took to the catwalk in an array of coats from military to duffle and re-issued trench coats. Jackets were overlayed with casual polo shirts and track suits, which came in both matte and sequined versions. The classic Burberry geometry made a discreet appearance on scarves and outerwear, in autumn-winter colours of grey, navy, ochre and black.

The Alexander McQueen label released its latest collection of menswear to a packed house. Models showcased elegantly tailored suits and blazers. Bold fossil prints on silk reflected the collection’s Darwinian theme combined with floral designs and paisley on flowing fabrics. Black and white shades were prominent, with the occasional splash of vibrant red or gold to emphasize the collection’s gothic theme.

Models posed in bomber jackets and long winter coats, in a variety of monochromatic tones and materials including leather and fur.

And the Topman collection offered an eclectic mix of looks. Models walked the runway in everything from ’90s inspired double denim to luxurious fabrics like velvet, silk, cashmere and tweed. The color palette mainly consisted of autumnal shades of red, brown and orange, with some blues and greys thrown in.

Although womenswear remains the cornerstone of the fashion industry, menswear is growing faster, and is now worth some 400 billion euros