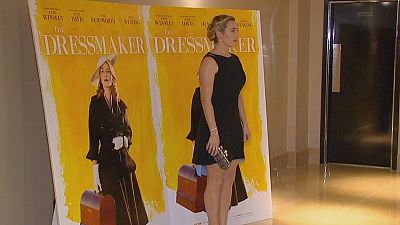 Based on Rosalie Ham’s best-selling novel, The Dressmaker tells the story of Tilly Dunnage, who returns to her small home town in Australia seeking revenge against those who accused her of murder when she was a child.

I loved the fact that it was both a comedy and a tragedy at the same time, and it's kind of a fable too

In the movie, set in the 1950s, Dunnage, who worked as a dressmaker for Europe’s couture fashion houses, uses her sewing skills to make beautiful clothes for the frumpily dressed people of her hometown, in exchange for information she can use to piece together the truth.

“I loved the fact that it was both a comedy and a tragedy at the same time, and it’s kind of a fable too,” Winslet said.

The Oscar-winning British actress, who had to sport an Australian accent for the role, said she also took to heart learning how to work the vintage Singer sewing machine used in the movie.

“I did spend about a month with an expert who did show me all the little nooks and crannies because a Singer sewing machine is very, very beautiful and it isn’t like a contemporary machine which works very quickly and it’s just sort of a touch of a button. This was much more technical and I really did love that side of it.”

“The Dressmaker,” which has topped the Australian box office, is on release in the UK on November 20.