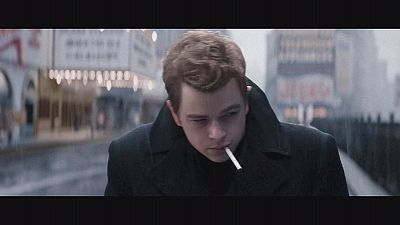 Pattinson, whose role in “Twilight”, threw him into the media spotlight was happy to find himself behind the lens as Dennis Stock.

“It’s quite fun, I mean it’s sort of interesting to know, to feel that the power trip, especially when I was shooting the scene on the red carpet, like when you’re part of the massive throng of people and not only you’re part of a crowd and hidden but also you can hide your own face, you see all the pressure’s on someone else, it’s kind of nice. You feel all secure in your little pack. It’s very different.”

The story follows Stock as he meets James Dean just as his fame is peaking and taking the most iconic stills of young actor’s short but intense life.

Having only made three films, there wasn’t much material for DeHaan to find the truth behind the legend of James Dean.

“There’s not a lot of footage to watch but I watched everything I could,” explains DeHaan. “There’s actually a recording of him when he went home to Indiana during these two weeks. He had this secret recorder that was a microphone hidden in a watch and a cord that ran up his sleeve into a recording device that he strapped in. It was a really valuable tool, because I got to see what he actually sounded like and not just what he sounded like in movies.”

Critics are divided on whether bringing a photographer’s eye to the legendary life of Dean is a triumph or a tragedy, but viewers can judge for themselves.

Life is currently on general release in European cinemas.