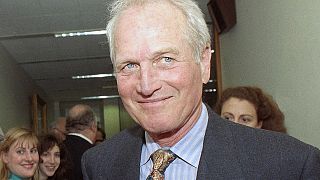 Newman, who died in 1983 of lung cancer, is known for his roles in ‘The Hustler’ and ‘Butch Cassidy and the Sundance Kid’ but his boyish good looks covered a life riddled with anxiety.

‘The Extraordinary Life of an Ordinary Man,’ which was originally conceived of in the 1980s, tells the story of a difficult upbringing, failed first marriage, excessive drinking, and the pressures of being on-screen eye candy.

In the book Newman says that he was always anxious about not living up to expectations and getting ahead in his career because of his appearance.

"It is difficult for a person like me, who has always had a terrible sinking feeling in the pit of his stomach that his success comes simply from being fortunate enough to be born looking a certain way,” writes the actor.

What is in Paul Newman’s memoir?

Newman originally began the memoir with screenwriter Stewart Stern but in 1991 the pair gave up after despairing that there was too much material.

The book is now being released after Newman’s daughter found interview transcripts in a family attic.

The book reveals that Newman wished to be viewed as more than just good looking as well as casting light on his relationships with other famous faces.

Newman had an on-screen partnership with Robert Redford, his opposite in “Butch Cassidy and the Sundance Kid’. However the memoir details that the Hollywood duo did not get along when the cameras weren’t rolling.

Another thread is the bitter jealousy Newman had for leading man James Dean that stemmed from a failed casting to be Dean's twin-brother in 'East of Eden'. Newman later replaced Dean in 'The Battler' after the actor's untimely death.

The highs and lows of Newman’s marriage to fellow actor Joanne Woodward are also covered.