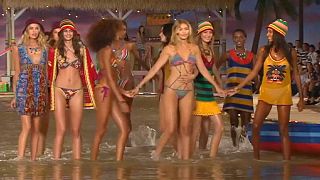 Spanish actress Penelope Cruz and Vogue Editor Anna Wintour were among the front row guests at the Carolina Herrera show in New York.

Held at the Frick Collection on Manhattan’s Fifth Avenue, Herrera’s absolute favorite museum in New York, the show featured a palette of pinks, ranging from pastels to deeper colours.

Feathers, silk, chiffon and organza were used in both day and evening wear for a feminine, airy collection and the designer also worked with “techno fabric” to achieve a pleated effect, a staple Herrera embellishment.

Designer Diane von Furstenberg walnts to give every woman a chance to paint her own destiny with her 2016 spring-summer collection.

Infused with a nostalgic 1970’s feel, it featured a colour palette made up of white, gold, khaki and vibrant pinks and prints.

Models glided down the runway in sheer tops and skirts. Leather and snake skin was mixed with chiffon and silk.

As always, the catwalk was filled with supermodels including Karlie Kloss, Kendall Jenner and sisters Bella and Gigi Hadid, who closed the show.

For his spring-summer collection, Tommy Hilfiger was inspired by the turquoise waters of the Caribbean. For the occasion, the iconic US designer turned Pier 36 along New York’s East River into an island lagoon complete with a boardwalk runway.

Footwear was comfy too with models strutting down the runway in sneakers and espadrilles.

After New York, Fashion Week moves on to London, Milan and Paris.