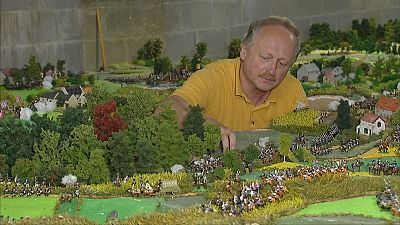 Belgium’s Willy Smout has finished a 40m2 replica of the 1815 Battle of Waterloo in his very own cellar, 40 years after he began the project as a teen.

...at a certain moment I asked myself, 'Where am I heading with this project?'

Three thousand model soldiers are in Smout’s version of the battle, which depicts Waterloo on the afternoon of June 18. On this day, Napoleon’s French army was defeated by combined British and Prussian forces.

Says Smout, “When I started I worked on it all the time, but at a certain moment I asked myself, ‘Where am I heading with this project?’ And so the 200-year anniversary seemed to me like the perfect goal to aim for. During the last couple of years I pushed myself really hard to finish, and I succeeded last week.”

Smout is confident the scene is a true replica of the battlefield and its surrounding areas. His research spanned six countries, and included visits to libraries, army barracks and museums, as well as studying artwork. The hills were even mapped using topographical techniques.

With his life’s work completed, Smout’s next wish is to welcome the descendants of the battle.

The final figurine he placed on the model was that of a Prussian army doctor.

Smout calculated he spent 150,000 euros and 33,000 hours on the project. But to this chemical engineer, the personal value of his ‘Waterloo’ is immeasurable.

Waterloo - How the world would be different if Napoleon had won

Napoleon, one of the founding fathers of Europe?