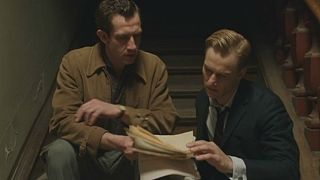 <p>It lacks perhaps the tinge of madness to make it a great movie, but there are good reasons to see “Labyrinth of Lies”. Giulio Ricciarelli’s film shows how German society faced up to the crimes of the Nazi regime.</p> <p>The action of the film begins in 1958 in Frankfurt undergoing reconstruction after the war: A young lawyer discovers documents that show responsibility for many Germans in Auschwitz crimes. But the desire to seek the truth does not please everyone.</p> <p><img src="http://www.euronews.com/media/download/articlepix/lies-labyrinth-cb16-bb1-150515.jpg" alt="" /></p> <p>The main theme of this film is the conflict between those who want to forget the past in the name of national reconciliation and those who demand justice.</p> <p>The film shows that it was not only a section of German society that wanted to forget the past. In the 1960s, denazification was no longer a priority for the United States.</p> <p>Giulio Ricciarelli’s first film is not very original in its directing, but the story, told like a thriller, is effective.</p>