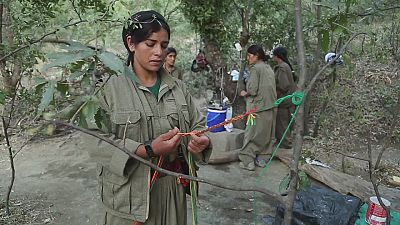 The documentary ‘Bakur’ caused no end of controversy at this year’s International Film Festival in Istanbul.

The screening of the film was cancelled just hours before it was set to roll.

The festival refused to pay a necessary fine to the Turkish Ministry of Culture.

The film was pulled, the jury members refused to take part and filmmakers withdrew their offerings.

As a result the 34th Istanbul Film Festival was cancelled.

‘Bakur’ (The North), follows the movements of fighters of the Kurdistan Workers Party (PKK).

The documentary is set in the mountains of Turkish Kurdistan at a time when the Turkish government and the PKK are engaged in an ongoing peace process.

The film gives a rare insight into the motivation behind the individuals involved.

The filmmaker had to gain the trust of his subjects at a particularly sensitive time.

Ertuğrul Mavioğlu is the film’s director:
“I have been a journalist since 1985 and my style of treating this issue is known by everybody, people know that they can trust me and that I am not twisting the facts around.”

The documentary was shot during the ceasefire in 2013 and 2014 and follows the daily lives of PKK members in three different camps.The film introduces us to the men and women who have decided to join the armed struggle for what they call a better future.

Ertuğrul Mavioğlu, film director: “I have to say that this film is not just about women. We went to PKK Camps in Turkey where there were women, we interviewed them, we wanted to show their reality and life expectations in the camps. We don’t tell the story – they do, we are the third eye.”

Conditions on the shoot were hard with difficult terrain and problems caused by altitude sickness.

Ertuğrul Mavioğlu: “It took some time to adapt to their life, we had a hard time, we got sick from the water, the food, the insects.”

Euronews reporter Wolfgang Spindler covered the event in Istanbul and filed the following: “With all the uproar about the screening ban of this film, all the discussion about the content of this documentary was lost . I ask the question, are not films and art in general used to illuminate difficult and delicate political subjects so they can be discussed openly in public?”