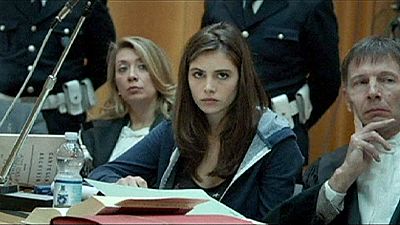 The murder of British student Meredith Kercher and the trial of her roomate, American Amanda Knox, is the subject of “The Face of an Angel” – a new movie by Michael Winterbottom.

In the end the film is about love and grief

British actress Kate Beckinsale plays the American reporter while Germany’s Daniel Bruhl stars as a film-maker working on a documentary on the case.

The British director’s film is based on a book by US journalist Barbie Latza Nadeau which explores the case surrounding Knox and her ex-boyfriend Raffael Sollecito.

“The film, in a way, is about the media’s reporting of that kind of story in general, not specifically that story, but the way the media treats those types of cases, of murder trials, of violent crime and so on,” said Winterbottom.

“But, the idea is, as the film develops, it moves away from that. So, it starts with, in a way, an explanation of the role of the media, but becomes more about – I hope – the girl who was killed and about the love for someone who you’re absent from… In the end the film is about love and grief.”

“It felt to me wrong to mix fictional names and the real names, to sort of combine the fictional journalist with the real case. So, we moved it to Siena, we changed the names, but all the facts of the story, all the facts of the trial, we deal with as accurately as we would have done if we’d said that this is a film about the case. We didn’t want to distort anything within the trial itself, or within the actual murder case.”

The case has inspired books and films for almost eight years and its release comes as Italy’s highest court considers whether to uphold the conviction of Knox and Sollecito.

Both maintain their innocence despite having been found guilty twice.