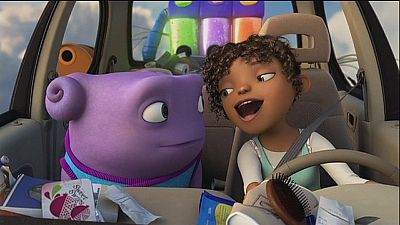 It's about someone finding home and home becomes where his new friends are.

“Home” is the tale of a loveable misfit from another planet who lands on Earth, ends up on the run from his own people and then meets a young girl named Tip.

Actor Jim Parsons explained the meaning of the film: “These people who all think certain things of each other – people and creatures – and they realise that when they don’t put on these pre-supposed ideas they can actually reveal that they have a lot in common and they become friends.”

Sentiments shared by Steve Martin: “It’s about someone finding home and home becomes where his new friends are.”

Along with providing the voice for 12-year-old Tip, Rihanna recorded several key songs for the film and was instrumental in shaping the movie soundtrack.

Based on Adam Rex’s 2007 children’s book “The True Meaning of Smekday”, Home is on worldwide release from March 19.