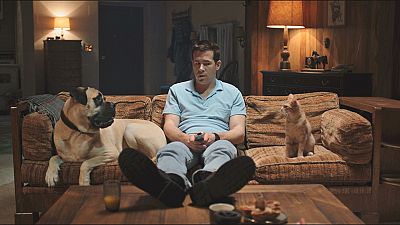 The Voices is a black comedy a combination of violence, horror and romance.

The hero of the film, Jerry played by Ryan Reynolds is upbeat with a sugary view of the world but he is also mentally ill hearing conflicting advice from his pets

It is the fourth film by Franco-Iranian director Marjan Satrapi and it is the first which she did not write. It was an experience she was ready to admit was enlightening.

“When you write your own movie script by yourself or when you repeat your own story then there is nothing unknown to you. It is my world which is limited to me. But when you are given a script it means a new world has been opened up and added to yours. That creates a much bigger world,” she explained.

Jerry falls in love with Fiona but he kills her and after that he becomes a serial killer encouraged by the voices.

He avoids taking his medication for his mental illness and hallucinates that his cat told him to be a serial killer. His pet dog argues against the cat insisting Jerry is really a good man.

“I am interested in creating a world that does not exist and that’s because I already live in the real world and that is my life. Cinema is a medium where you can present everything bigger, more colourful and more beautiful. Through cinema you can create everything better. That is much more interesting for me, to make a fantasy world from zero, a world that does not exist. So I always work on stories which are fantasy,” said the director.

When Jerry starts reluctantly taking his medication again he begins experiencing brief moments of lucidity in which he realises that the reality of his life is already far more violent than he had perceived it to be.

The director had success with the 2011 movie Chicken with Plums with a plot set in Iran and shot in Germany. There are no links with Iran in The Voices and it seems she has no intention to make more films about Iran.

“I wanted to make a movie about Iran and now I have done that. I talked about what I wanted to do but after repeating the same words and repeating myself many times you will bore your audiences. I haven’t been in Iran for 26 years. So I had something to say until 1994 when I was in Iran but now it is finished and I have nothing more to say about Iran,” she concluded.