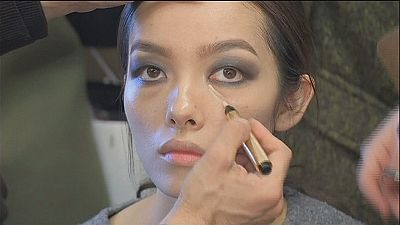 Diane von Furstenberg took a walk on the sensual side with her fall 2015 collection at New York Fashion Week.

During the day, she commands the room and at night she inspires fantasy. It's very seductive.

But, that’s where any apparent connection to ’50 Shades of Grey’ ends, as the designer explained:

“It’s masculine and feminine. She’s a little bit of a double agent. Actually, that’s the name of her bag. She is masculine in the sense that during the day she wears tweed and pinstripe, but both structures and at the same time a pinstripe chiffon,” Von Furstenberg said. “So, during the day, she commands the room and at night she inspires fantasy. It’s very seductive. I didn’t plan it to be, to coincide, to come out the same day as ’50 Shades’.”

The stage is set... our Fall 2015 runway. #SEDUCTIONxDVF#NYFWpic.twitter.com/lqGDuNwOGQ

Models dressed in reds, blacks and lace sauntered down a lacquered runway. DVF’s mixture of masculine and feminine could be seen in ultra-girly dresses and patterns, combined with structured boyfriend-style blazers, or broad-shouldered coats.

'She commands her world and inspires fantasy...' Read more about #SEDUCTIONxDVF via @wwd: http://t.co/LXptkZl0R0#NYFW

Founded in 2005 by musician Bono and his wife Ali Hewson, EDUN aims to promote trade in Africa.

The brand took its inspiration for the new season from Morocco.

Creative Director Daniele Sherman kept the tailoring pared down and used muted colours, such as black, white and red.

Sixties-style shift dresses were colour-blocked, while the pea coats were oversized and monochromatic.