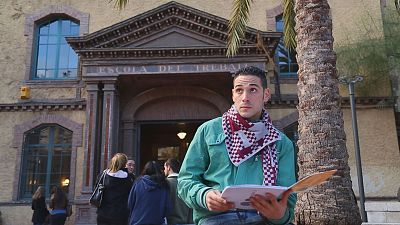 In a country where the school drop-out rate is around twice the European average, Generation Y met those swimming against the tide. We went to Barcelona to talk to young people who have decided to go back school.

Almost 10 years ago, Lucas Martos decided to quit school. He says he couldn’t see the point in continuing: “Before, I wasn’t interested in school. I was younger, that’s true, but I didn’t see any point in it, it wasn’t producing any results. And I knew that outside school, as a 16-year-old, I could be making money. At that time, I just thought school was a waste of time.”

Lucas worked in construction and manual jobs. But a health problem forced him to stop temporarily. Then he decided to finish high school and study to become a lab technician.

“Even the idea of coming back frightened me. But I’m more mature now, so I decided to try. It’s like work: you have to persevere, you have to keep it together. It’s the same thing here,” Lucas says. “Whenever I was around people who went to university and the conversation turned to culture or education, I felt out of it. When I finally finished high school, I told my girlfriend: now I can play Trivial Pursuit and answer some questions.”

Mar Corredor had also been also looking for answers for almost a year.

“I started to skip classes and finally I stopped going. I had no motivation, I didn’t like it, I didn’t understand where it was leading,” she says.

A volunteering experience made her think about kick-starting her education, this time training to work with people with special needs.

“You have to, because employers are always asking for more degrees, more masters, more whatever, just to be able to work somewhere,” she says.

Lucas and Mar decided to go back to school themselves, but many in their situation don’t. It is they who are the focus of a new European Erasmus Plus programme aimed at bringing the drop-out rate below 10% by 2020.

However, that is a very ambitious target concedes Xavier Chavarria Navarro, head of the Prevention School Drop-Out project:

“Now, in Spain, it’s around 30%. Until recently there was lots of work in construction, now it’s tourism. Most are jobs that don’t require specific training and you don’t have to have qualifications to make money.”

The crisis, particularly in construction, left many youngsters without a job and some had little education. Xavier Chavarria Navarro works to keep 16-24 year-olds in or bring them back to the education system.

“We can adjust the curricular programme according to their interests, providing an interesting and attractive educational process that makes sense to them,” he says.

“If they’re helping you to go down the path of returning to study, showing you what steps to take to make it easier, I think it can be very positive,” says Lucas Martos.

Xavier Chavarria Navarro says every case is treated individually. “We can guide young people, and the schools that integrate them, to a customised type of orientation, diversifying the curricula in order to make it more attractive to them.”

Chat: How to stop the dropouts?