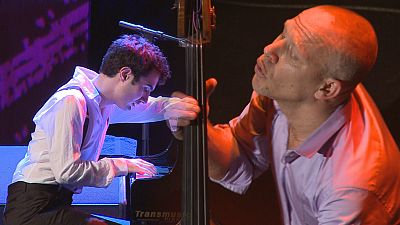 The latest edition of the Monte Carlo Jazz Festival ended on a virtuoso note thanks to two spectacular artists: one is Israeli bass player extraordinaire Avishai Cohen, the other is the dynamic, Armenian, pianist Tigran Hamasyan, who retraces the folk footsteps of his homeland through his musical prowess.

Tigran Hamasyan explained his technique to euronews: “The way I approach Armenian folk music is actually that I write melodies that sound like Armenian folk music, it’s just like learning a language and [then] composing in that language.

“Any kind of folk music is something very deep and rich. It has so much potential for development, [there are] infinite ways you can arrange [it] and approach your music.

“When I was 13 I discovered it through musicians like Keith Jarrett, Jan Garbarek and Gurdjieff’s music – those musicians helped me find my own style and since then it has become a part of me. Every time I play music I’m happy and I know that it is exactly what I want to do. Just to have that feeling — I know why I am here!”

Bass player and recent vocalist Avishai Cohen makes his own distinction between living in the here and now: “There are two main kinds [of moments of creation]: one is when I’m alone and I’m composing something and I’m feeling this stream of… you can call it energy, electricity, some kind of uplifting moment where I’m feeling something that I don’t know. Then there’s the moment on stage with the band, when I’ll play and create at the moment of what we do together, [and that] is something I’m sharing with people on the spot.

“Singing was a very big thing for me at the beginning, I was so afraid of it but I knew I had to do it and it’s very difficult after years of being an instrumentalist. But it’s made me a better person and a better musician. It takes a lot of practice, but it’s just as much about accepting your voice and accepting yourself – it’s a process.”

This edition of Musica features the following pieces: ‘The Spinners’ and ‘The Legend of the Moon’, from a fable by Tigran (Verve); and ‘Seven Seas’ and ‘Dreaming’, from Seven Seas by Avishai Cohen (EMI).