Russian President Vladimir Putin on Thursday told Russian forces not to storm Ukraine's last stronghold in the port city of Mariupol as the city's Ukrainian defenders said they may only have a few days or hours left.

It comes after Ukrainian officials called for a "special round of negotiations" in Mariupol without conditions as Russia's offensive intensifies in the east.

Read the latest updates from Ukraine in our blog below and watch our TV coverage in the video player above.

No residents could be evacuated from the encircled city of Mariupol on Thursday due to continuing Russian shelling of agreed-to humanitarian corridors, Ukrainian deputy PM Iryna Vereshchuk said in a Telegram post on Thursday evening.

In the same post, Vereshchuk acknowledged that on Wednesday, a four-bus convoy was allowed to transport 79 civilians from Mariupol to Kyiv-controlled territory in Ukraine’s southeastern Zaporizhzhia region - a development she said “gave her hope.” 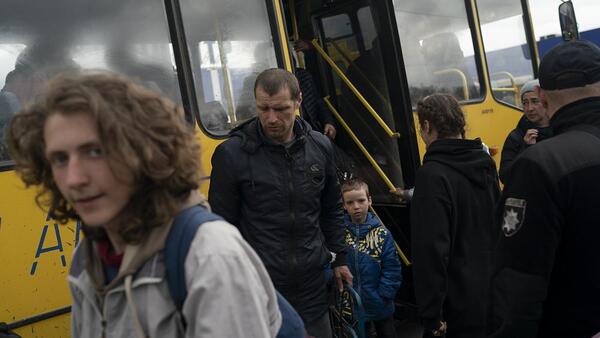 Ukraine's President Zelenskyy says 120,000 civilians are trapped in Mariupol. On Thursday Ukraine said none could be evacuated due to Russian shelling.
22:52

Russia handed over to Ukraine 10 soldiers, including two officers, and nine civilians in an exchange of prisoners of war, Iryna Vereshchuk, the Ukrainian deputy prime minister said on Thursday.

"This time there were wounded among those released and ... now they will be able to receive full treatment and undergo rehabilitation," she said in Telegram messaging app.

More than 600,000 additional people were internally displaced in Ukraine in the first 17 days of April, the International Organization for Migration said on Thursday, pushing the total number since the start of the war above 7.7 million, or 17% of the population.

The new assessment conducted between April 11 and 17 showed that women represent at least 60% of those on the run. More than half of internally displaced persons -- mainly in the east of Ukraine -- reported a lack of some food products, the UN agency added in a report.

More than 5 million people have fled Ukraine since the Russian invasion on Feb. 24, UN data show.

As many as 9,000 civilians could be buried in a mass grave in the village of Manhush outside Mariupol, the city’s mayor said in a Telegram post Thursday.

“The greatest war crime of the 21st century has been committed in Mariupol. This is the new Babi Yar,” Mariupol Mayor Vadym Boychenko said, referring to the site of multiple Nazi massacres in which nearly 34,000 Ukrainian Jews were killed in 1941.

“Then Hitler killed Jews, Roma and Slavs. And now Putin is destroying Ukrainians. He has already killed tens of thousands of civilians in Mariupol,” he added. “This requires a strong reaction from the entire world. We need to stop the genocide by any means possible.”

In a separate statement earlier Thursday, Boychenko alleged the Russians had dug huge trenches near Manhush, 20 kilometres west of Mariupol, and were “hiding their war crimes” by dumping bodies there.

On Thursday evening, Ukrainian media published satellite photos of Manhush, showing what they said were mass graves similar to - although much larger in size from - the ones discovered in the Kyiv suburb of Bucha. The accuracy of these claims and images could not be immediately verified.

A private U.S. company said on Thursday said satellite imagery from Manhush shows a mass grave site that has expanded in recent weeks to contain more than 200 new graves.

Maxar Technologies said a review of images from mid-March through mid-April indicates the expansion began between March 23-26. The site lies adjacent to an existing cemetery in the village west of Mariupol, Maxar said.

A 91-year-old Holocaust survivor has died in a basement in the besieged Ukrainian port of Mariupol.

The Judaism website Chabad.org and the Auschwitz Memorial announced the death of Vanda Semyonovna Obiedkova.

Chabad.org, a website run by the Chabad-Lubavitch movement, reported that Obiedkova's daughter shared the news about her mother after arriving to a safe location with the rest of her family. The daughter said Obiedkova died pleading for water in a freezing basement on April 4.

Obiedkova was 10 years old when the Nazis occupied Mariupol in 1941 and killed thousands of Jews in a single day, including her mother. She survived in a basement then, and died in a basement in the same city 81 years later. (AP)

"And we will need hundreds of billions of dollars for reconstruction," he said during a roundtable discussion on aid to Ukraine at a meeting of the IMF and World Bank in Washington.

Russian forces have been accused of burying the bodies of Ukrainian civilians in order to cover up their "military crimes" by Mariupol's mayor.

Vadym Boychenko, mayor of the besieged city, alleged on Thursday that the Russians had buried hundreds of civilians on the outskirts of Mariupol.

This claim cannot be independently verified, with Russia saying publically that it has not targeted civilians.

"The bodies started disappearing from the streets of the city,” said Boychenko during an online briefing, adding that Russia's troops were “hiding the trace of their crimes and using mass graves as one of the instruments for that.”

“They are hiding their military crimes,” he continued.

Boychenko said that the Russians dug huge trenches near Manhush, 20 kilometres (about 12 miles) west of Mariupol. Here they took " the bodies of the dead residents of Mariupol in trucks and throw them into those trenches.”

Ukraine's President Volodymyr Zelenskyy has said some 120,000 civilians are blocked from leaving the besieged city of Mariupol.

Only a handful of buses evacuating civilians from Mariupol, which has been attacked since the start of the war, reportedly arrived in Zaporizhia Thursday.

The UK's department for international trade has announced a ban on imports of Russian caviar and other high-end products.

This latest round of sanctions will cover silver and wood products, while tariffs on imports of diamonds and rubber from Russia and Belarus are being hiked by 35%.

"We are taking every opportunity we can to ratchet the pressure to isolate the Russian economy," said the UK's UK’s international trade secretary, Anne-Marie Trevelyan, in a statement.

"These further measures will tighten the screws, shutting down lucrative avenues of funding for [Vladimir] Putin’s war machine," she added.