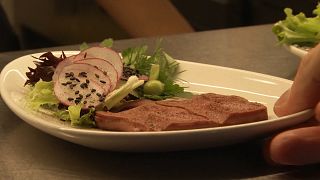 Spanish startup Novameat says it's close to perfecting a plant-based steak, perhaps as soon as summer this year.

Novameat first unveiled its 3D-printed plant-based steak back in 2018.

Now, founder and CEO Giuseppe Scionti believes they've perfected the texture and appearance, next is the taste and nutritional properties of beef steak.

While companies Beyond Meat and Impossible Foods have found success with replicating ground meats, Novameat is trying to crack the complicated fibrous textures of steak.

Scionti's plant-based steak is printed using a paste of vegan ingredients. They're mainly using a mixture of rice and pea proteins and testing different oils.

In the coming months, they plan to begin working with top chefs and scale up production to 50 kilograms per hour.

Before founding Novameat, Scionti spent ten years as a researcher in tissue engineering.

Estimates vary, but a report by the United Nations said livestock is responsible for about 15% of the world's gas emissions that warm the climate.

Scionti and his colleagues are testing their "Steak 2.0" at restaurant Clubhaus in the centre of Barcelona.

Chefs lightly sear the digitally printed steaks on both sides, before adding some oil and seasoning, just like a traditional beef steak.

"We're talking to the chefs. They were really surprised by the way it cooks the same as a steak. You put it on a plancha the same, you put the oil and the salt," he says.

"And I think if we can get a product that's as close to possible to steak, then it's for sure gonna be a top seller."