Barcelona have extended their lead at the top of La Liga to nine points with a comprehensive 3-0 victory over Real Madrid in the latest clásico at the Bernabeu.

Second-half goals from Luis Suarez, Leo Messi from the penalty spot and Aleix Vidal in added time secured the win - the third consecutive away victory for the Catalan side against their bitter rivals.

Real were reduced to ten men when Dani Carvajal was sent off for handball on the goalline, the incident that gave Barca their penalty.

Barcelona travelled to the Spanish capital amid a highly charged atmosphere following this week's regional elections in Catalonia.

A few minutes after the final whistle, Barca tweeted a "Messi Christmas" to their fans in jubilation at the result.

Following a tense but tight first half that ended goalless, a breakaway move gave the visitors the lead nine minutes after the restart.

Suarez converted a simple pass from Sergi Roberto as Barcelona capitalised on wide open space in the home side's midfield.

Another counter attack provided the second goal 10 minutes later. Messi scored from the spot after Carvajal blocked a goal-bound header from Paulinho with his arm, prompting the referee to show the red card.

Vidal, a defender-turned-winger, rubbed salt into Real's wounds when he hit a third right at the death.

It was a humiliating end to a frustrating afternoon for the Spanish and European champions, whose chance of retaining their domestic title seem to be fading fast.

Chances came for the home side in the first half, but Karim Benzema's header came off the post and Cristiano Ronaldo was denied by Barca goalkeeper Marc-Andre ter Stegen who saved with his leg.

Zinedine Zidane's team are now 14 points adrift but have a game in hand.

The match - played at lunchtime to try to maximise the television audience in Asia - was played against the backdrop of a political crisis in Catalonia and the rest of Spain. Thursday's election gave separatist parties a parliamentary majority but the region remains stubbornly divided. 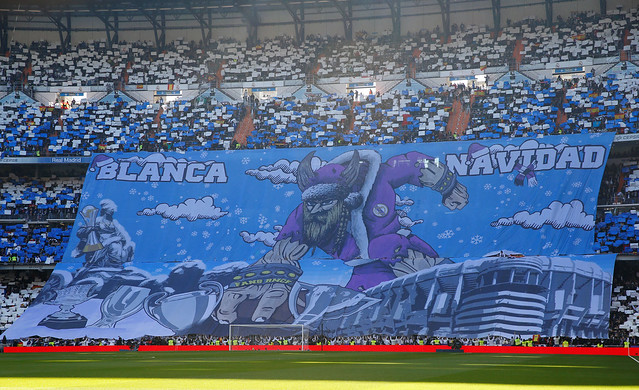 Real's supporters unfurled a giant banner before kick-off to boast of their five trophies the club had won in 2017, while another wished fans a white Christmas. Instead it is turning into something of a bleak winter for Madrid as La Liga reaches the half-way stage.

The contrast with the Catalan club's fortunes is stark. Ernesto Valverde's team are unbeaten since they were defeated – by Real Madrid – over two legs in the Spanish Supercopa back in August.