At least ten people, including the gunman, have died after a shooting at a shopping centre in Munich.

Munich went into lockdown after the rampage began around 6pm on Friday evening.

The attack – at the Olympia shopping mall – left terrified shoppers and staff running for their lives.

Some were stuck inside the building, hiding where they could.

Follow our live blog for the latest updates on the Munich shooting rampage https://t.co/ZKHZBLxEffpic.twitter.com/CfSEVlYnIZ

Officials told the public to get off the streets as the city – Germany’s third largest – went into a state of emergency.

Tram, train and bus services were suspended and highways were sealed off.

What happened to the gunman?

Police say the gunman – who is believed to have acted alone – killed himself with his own weapon.

The sad result of #munich#gunfire
10 fatal casualties, among them the shooter
16 injured
For more see(german text):https://t.co/ZooBf7NG6J

There was no claim of responsibility in the immediate aftermath of the attack.

Passers-by have begun to leave flowers and candles at the scene of Friday’s shooting.

Flowers and candles laid near scene of Munich shooting https://t.co/MfLVxiVzrnpic.twitter.com/xOckdHmVFe

This is the third attack targeting civilians in Western Europe in eight days.

It comes four days after five people were stabbed and injured on a train in Germany by an Afghan asylum seeker. 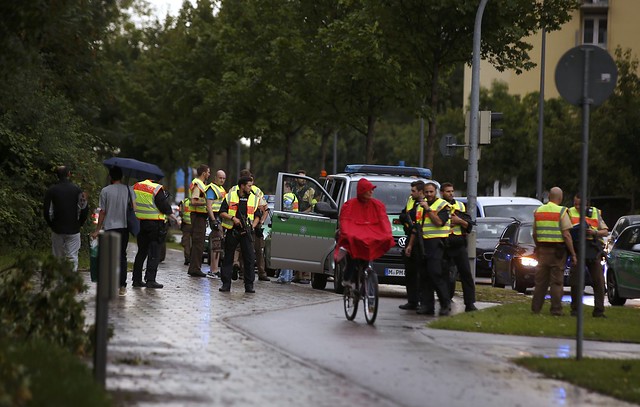