Ten members of the Charlie Hebdo editorial team have been shot dead in Paris, along with the two police officers who were guarding their offices.

They include four of the country’s best-known cartoonists, one of whom was an alternative culture legend from the 1960s, a veteran of every fringe publication under the sun, and beloved author of dozens of cartoon albums.

Charb was the baby of the murdered quartet, only 47, but in his short career had become the director of Charlie Hebdo and had won a reputation for his particularly corrosive style, his weekly Ayatollah Charb’s Fatwa, and his anticapitalist cat and dog team, Maurice and Patapon.

Obviously Charb was a fan of Little Britain. The caption says “Who really wants the British in Europe?” 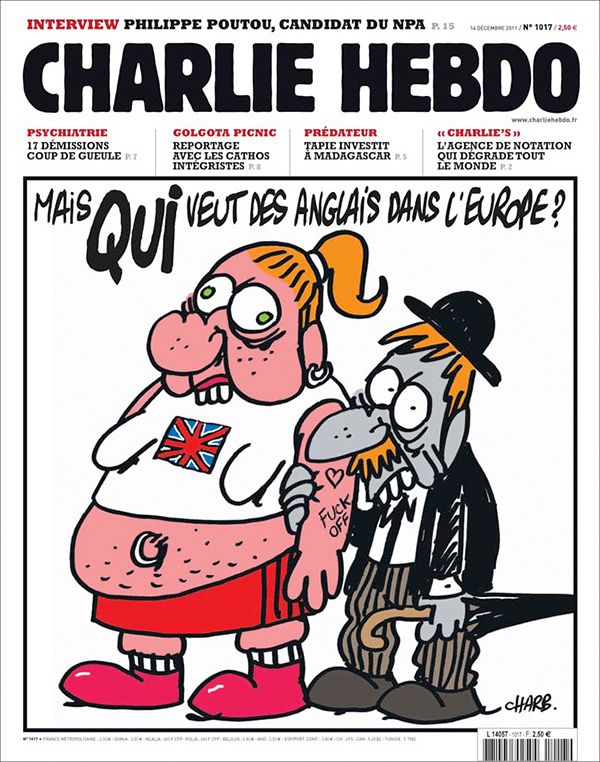 Cabu was of a completely different generation, aged 76, and drew some of his first caricatures in the French army, where he served as a conscript in Algeria. He then spent years drawing live on children’s television, and worked for all the major French TV channels and papers, although spending much of his time and working mostly with his Charlie Hebdo kindred spirits.

Cabu’s most notorious drawing is a Charlie Hebdo cover that sparked riots. Translated it reads “Mohammed overwhelmed by fundamentalists”, to which Mohammed sighs “It’s hard to loved by such c***s”.

Born in 1934 in Tunis Georges Wolinski was one of the grand old men of French comics. He brought out his first drawings in 1960, publishing in a number of magazines and papers, and founding one during the 1968 student uprising, but he was best known for his work with Hari Kiri, and Charlie Hebdo.

Not all of Wolinski’s drawings were political. Here the woman asks the little boy what he wants to be when he grows up, and he replies “A sex maniac”. Busty, sexually voracious women and, occasionally, men, featured heavily in his ribald, sexually-challenging drawings. 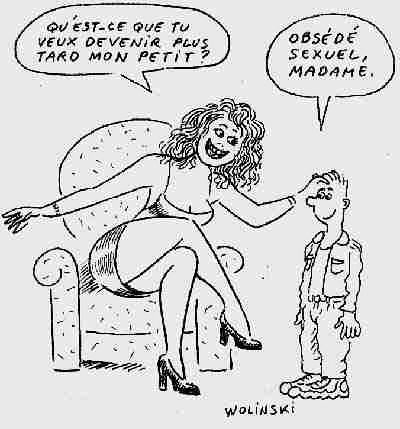 Tignous, as a child of the fifties, escaped the colonialism that so marked other contesting French voices seeking to express themselves in print, but his anti-authoritarian and especially anti-fascist voice chimed perfectly with the Charlie Hebdo team, and his caricatures of former French FN leader Jean Marie Le Pen portraying him as a toad were notably savage.