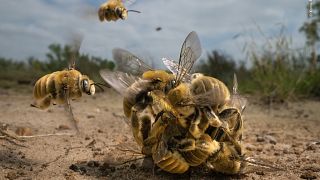 The winners of the Wildlife Photographer of the Year competition were unveiled in London this week.

38,575 entries from 93 countries were whittled down to 19 category winners and two ‘Grand Title’ winners.

So much of animals’ beauty goes unseen by human eyes. So there’s something truly special when it is captured on camera.

This year’s selection ranges from an electrifying reproductive dance to a poignant portrait of a bear in its disappearing habitat.

American photographer Karine Aigner was announced as the ultimate Wildlife Photographer of the Year for her remarkable image of a buzzing ball of cactus bees spinning over the hot sand on a Texas ranch.

Take a look at some of the winning photographs below.

Spectacled bears, found from western Venezuela to Bolivia, have suffered massive declines as the result of habitat fragmentation and loss. Around the world, as humans continue to build and farm, space for wildlife is increasingly squeezed out.

Brent Stirton photographed Ndakasi’s rescue as a two month-old mountain gorilla after her troop was brutally killed by a powerful charcoal mafia to send a message to park rangers.

Here he memorialised her passing as she lay in the arms of her rescuer and caregiver of 13 years, ranger Andre Bauma.

As a result of unrelenting conservation efforts focusing on the daily protection of individual gorillas, mountain gorilla numbers have quadrupled to over 1,000 in the last 40 years.

The electrifying reproductive dance of a giant sea star. And yes that white substance swirling around it is sperm.

The ‘dancing’ posture of spawning sea stars rising and swaying may help release eggs and sperm, or may help sweep the eggs and sperm into the currents where they fertilise together in the water.

The Wildlife Photographer of the Year Karine Aigner gets close to the action as a group of bees compete to mate.

Aigner captured the flurry of activity as a buzzing ball of cactus bees spun over the hot sand. After a few minutes, the pair at its centre flew away to mate.

The world’s bees are under threat from habitat loss, pesticides and climate change. With 70 per cent of bee species nesting underground, it is increasingly important that areas of natural soil are left undisturbed.

There were just seconds to get the shot as the rat snake retreated into its crevice with its bat prey. Every evening at sundown in the Cave of the Hanging Snakes, thousands of bats leave for the night’s feeding. It is also when hungry rat snakes emerge, dangling from the roof to snatch their prey in mid-air.

This haunting scene of polar bears shrouded in fog was shot at a long-deserted settlement on Kolyuchin Island in the Chukchi Sea.

On a yacht, seeking shelter from a storm, photographer Dmitry Kokh spotted the polar bears roaming among the buildings of the long-deserted settlement. As they explored every window and door, Kokh used a drone to take a picture that conjures up a post-apocalyptic future.

This scene in the forests of Mount Olympus could be straight from a fairytale.

Morels are an edible type of fungi. They are regarded as gastronomic treasures in many parts of the world because they are difficult to cultivate, yet in some forests they flourish naturally.