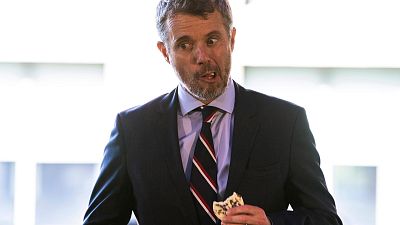 Crown Prince Frederik of Denmark sampled a cookie made with crickets on Tuesday in the name of combatting climate change and food insecurity.

Topped with dried crickets, the cookie was one of several green food solutions presented at the Citizen Sustainability Summit's session on sustainable food.

The confection was made by BugBox, an Estonian company that develops technology to sustainably rear insects for alternative proteins.

"The Crown Prince liked the cookie," the summit's spokesperson said.

Why is the Danish Crown Prince eating crickets?

Put on by the Danish consulate in New York, the Citizen Sustainability Summit is a three-day event covering sustainability, liveability and inclusivity. It aims to bridge the gap between decision-makers and citizens.

The event aligns with this year's high-level meeting of the UN General Assembly, which the crown prince is attending to help launch Denmark's candidacy for a seat on the UN Security Council in 2025, according to a press release from the palace.

Are crickets a sustainable food source of the future?

Commonly consumed in parts of Africa, Asia and South America, insects are not a new food source - but they are gaining popularity elsewhere as a cheap, sustainable and easy-to-produce source of nutrients and protein.

As the world searches for future-proof food solutions, will crickets become a common sight on supermarket shelves around the globe?

With the world’s population hurtling towards an estimated 9.7 billion by 2050, we will be tasked with increasing food production by a staggering 60 percent.

Requiring less space and fewer resources than conventional sources of protein, insects are perfectly positioned to fill this void.

Research by the UN’s Food and Agriculture Organisation (FAO) shows that crickets require six times less feed than cattle to create the same amount of protein and are capable of offering similar protein levels per 100g.