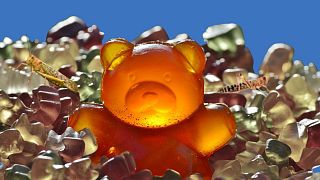 When you think of locusts you probably picture biblical plagues consuming fields of crops. But now one company wants you to think of your sweet-tooth instead.

Israeli food technology firm Hargol is farming locusts to produce a range of treats, including gummy bears and chocolate-flavoured protein powders. The sweet gummies come in two flavours, strawberry and orange, and are made using locusts that are native to Israel.

“Locusta migratoria is one of the two types of locusts considered to be kosher and halal,” Dror Tamir, the founder of Hargol, told Haaretz.

Before they are turned into protein powder, the insects are fed a diet of organic grass, ensuring no pesticides are involved in the breeding process.

Are locusts good for you?

Locusts and grasshoppers - which are part of the same family - are the most widely eaten insect in the world. They are also very nutritious.

According to Hargol’s website, locusts contain 72 per cent whole protein, along with omega-3, iron, zinc, calcium and a whole host of other vitamins.

They don’t contain any saturated fat or cholesterol either, making them a healthy alternative to farmed protein sources, such as meat and dairy.

Why is eating insects good for the environment?

They’re not just good for human health either, eating a locust diet is good for the planet as well. Farmed locusts require a very small water footprint, which makes their carbon footprint tiny too.

According to the UN, there are more than 1,900 edible insects in the world and we should be eating more of them if we want to transition to a more sustainable way of living.

Other edible insects include some species of ant, termites, mealworms and stinkbugs.

In fact, globally close to 2 billion people already enjoy a diet of insects, in countries such as Ghana, Brazil and Japan, with western countries being the slowest to adapt to this sustainable diet.

A religious approach to marketing

To market their locusts, Hargol has taken things one step further though. Based in Israel, the company has come up with a unique branding strategy to help them sell their locust powders, gummies and energy bars. They’ve turned to the Bible.

Eating locusts is mentioned in the Bible on two occasions, including when John the Baptist’s healthy diet is described in Matthew 3:4 as consisting of “locust and wild honey…”.

For those who really want to eat like their Biblical forefathers, whole locusts in a jar are available, and are selling well according to Tamir.

But if you are a bit more squeamish about eating insects, the gummy bears provide a more palatable alternative.

“The biggest challenge is to get the West to relate to locusts as a consumable, and to supply it in a familiar, beloved and tasty way,” he says.