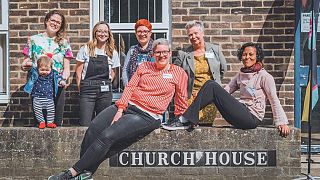 In a year when everyone is focused on eating well for less as the cost of living soars, we take a look at how consumers can protect the planet and their pocket by snapping up fresh produce that would otherwise be binned.

Ever since Milan won the Earthshot prize in October for its citywide project redistributing surplus food from supermarkets, restaurants and company canteens, community larders, social supermarkets and food rescues have been firmly on the menu across Europe when it comes to feeding people, not landfill.

And no-one who sees the boxes of mouth-watering fruit, veg, baked goods and store cupboard essentials on offer would guess that the produce was actually saved from the bin.

This week Stop Food Waste Day provided a global call for consumers to play their part in cutting the amount of edible produce bypassing plates and heading straight for landfill.

An EU report in 2019 suggested that only redistributing unsold produce to those in food poverty is not enough anymore. More wasted food needs to be handed out to slash the 88 million tonnes generated annually across the EU and to meet the United Nations target of halving food waste by 2030.

“We value the food and give it respect. It’s grown by the farmer and made possible by the Earth,” she says.

The ethos of the food rescue is that anyone who wants to save food from landfill, regardless of their economic status, is given a warm welcome.

“In the queue, people get to know each other. The millionaire and the pauper could be standing next to each other, but they don't realise as it doesn't matter. It’s proper diversity as we are all there for a common goal.”

Surplus stock that would have been binned by supermarkets and suppliers is given out to ‘shoppers’ who attend the weekly sessions, which have the feel of a farmers’ market.

“Food is a vehicle to start talking about living a life, as a consumer, of wholesomeness and simplicity, which is missing in people’s decision-making,” she says.

Every town should do its bit

Emma feels strongly that food waste should be a devolved issue. “Every town should look after its own waste,” she adds.

This belief came about when Emma, a cookery teacher, went to Ghana to help paint a school and start a library there with charity Humanitas in 2018. Little did she know - she would be the one who received an education.

Horrified at finding plastic food wrappers from the UK dumped thousands of miles from home, she discovered that some UK councils had contracts to send rubbish to countries in West and North Africa.

We value the food and give it respect. It’s grown by the farmer and made possible by the Earth

So when Emma learnt that even more waste was occurring at the back of her own local supermarkets in the UK, with still edible stock simply thrown in the bin, she knew she had to act.

Making contact with the Best Before cafe in Letchworth Garden City, she used what she learnt there to start her own hub in the town of Hitchin, before setting up a second session in nearby Stevenage.

The food rescue has also operated a third hub in Welwyn Garden City.

Originally Canadian, Emma grew up in Barbados and points out that people there have a very different attitude towards food. “In Barbados, most food is imported and it’s very precious. Every bit of food is considered,” she says.

What's a social supermarket? Or a community larder?

With different ways of operating, it can sometimes be hard to know whether a scheme that is redistributing food is open to all, like the Food Rescue Hub, or is only for those in need, like a food bank.

A social supermarket offers surplus stock, often being redistributed through schemes like FareShare, to anyone who wants to buy it at a reduced rate. The money raised is put back into the local community.

Community larders and fridges take items that are close to their sell-by date and offer them free to anyone who can use them. They are often a more informal way of redistributing unwanted food, with individuals both donating and receiving items.

What else is being done to tackle food waste?

Other European countries have come up with their own ways of tackling the mountain of food waste that occurs each year.

France even went so far as to ban supermarkets from throwing away unsold food rather than donating it to good causes in 2016, while the popular Too Good to Go app, which matches up end-of-day cafe and shop produce with customers, started in Denmark in 2015 and now operates across 15 countries.

The founders of the Oddbox fruit and veg box, which delivers fresh but wonky produce, were inspired by a trip to a Portuguese market, where goods came in all shapes and sizes but tasted delicious.

And box scheme Earth & Wheat, aimed at cutting the 24m pieces of bread wasted in the UK every day, sends out fresh bread that would otherwise be binned thanks to its appearance.

With the fight against food waste not going stale, there's no shelf life for the mission to feed people, not landfill.