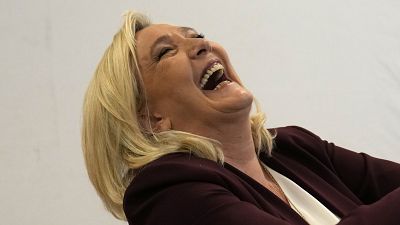 Marine Le Pen, far right presidential candidate.   -   Copyright  Francois Mori/Copyright 2022 The Associated Press. All rights reserved.
The opinions expressed in this article are those of the author and do not represent in any way the editorial position of Euronews.
By Laurent Hubert and Jean-Noël Geist  •  Updated: 22/04/2022

The Shift Project is a French thinktank advocating for the shift to a post-carbon economy. As a non-profit organisation committed to scientific objectivity, it is dedicated to informing and influencing the debate on the energy transition in Europe. Here, the coordinator for European Affairs, Laurent Hubert, analyses far right presidential candidate Marine Le Pen's environmental agenda.

With just a few days to go before the final round of the presidential elections in France, do the two finalists, Marine Le Pen and Emmanuel Macron, have proposals that adequately address and tackle the climate crisis?

It’s the question we are all asking ourselves. And, in short, the answer is no.

So let’s focus on far right candidate Le Pen and analyse whether there is any substance behind her green pledges.

As climate concerns grow more and more important on France’s political scene, Le Pen has had to strengthen her ecological agenda - in comparison with her position in 2012 and 2017.

She claims to support climate neutrality by 2050 in France. But there are a whole host of shortcomings, inconsistencies and key measures missing from her programme, which fails to provide a credible and feasible national decarbonisation strategy.

What is Marine Le Pen’s take on energy?

Le Pen’s key climate and energy proposal relies on the production increase of low-carbon electricity, which aims to reach 940 TWh by 2050. So in simple terms, that’s 65 per cent more than today.

Nuclear power is the cornerstone of this strategy.

It all depends on the launch of five pairs of nuclear reactors (réacteurs pressurisé européen or EPRs) from 2031 and another five by 2036, which would increase the lifespan of nuclear plants to 60 years.

What’s worse, she is actively discouraging renewable energy development. She wants to prevent the wind energy sector from advancing further by dampening all public support for it - and even dismantle existing wind turbines in the process. The major players in the renewable sector (EDF, GIFEN, SFEN, CEA) have publicly stated that if Le Pen becomes president, industrial capacities will be extremely limited by 2050.

She wants to prevent the wind energy sector from advancing further - and even dismantle existing wind turbines in the process.

When it comes to any sort of industrial strategy or how to treat skilled workers in the energy field, she doesn’t even mention this and it’s a glaring gap for us all to see.

Beyond electricity, Le Pen is also calling for a ‘hydrogen revolution’ for sectors having trouble with electrification. But she fails to explain its feasibility in terms of infrastructure, an industrial roadmap, jobs and skills, research or innovation.

At the same time, her plan to reduce taxes on fossil fuels, considered a “social aberration”, could provoke an increase in the fuels’ consumption. This would be dangerous as it would be a direct contradiction of both her decarbonisation plan, plans to wean off Russian oil and her supposed gas consumption reduction objectives.

Does Le Pen have a plan for industry and greener buildings?

Le Pen plans to “relocalise” France’s industry and to double its GDP share compared to today - up to 20 per cent by 2050. She says this is in order to reduce France’s “imported emissions'' and its reliance on foreign economies.

So industrial processes would be decarbonised thanks to the development of the hydrogen sector. But at the same time, a massive renovation plan for buildings is proposed, prioritising the installation of heat pumps, “subject to the creation of a French industry”.

Although these measures could have a positive impact on France’s overall carbon footprint, Le Pen’s programme fails to clarify what the strategy is. She doesn’t set any targets or provide an impact assessment in order to achieve such ambitious objectives - so it comes across as simply hot air.

What about her plan for the transport sector?

Transport represents 31 per cent of France’s emissions overall, so it’s a significant sector to address on a presidential environmental agenda.

Le Pen wants to preserve the use of individual cars in mobility. She intends to “slow down” the substitution of fossil fuel cars with their electric counterparts, by developing hybrids and biofuels, as well as hydrogen vehicles.

Le Pen wants to preserve the use of individual cars in mobility.

However, authorising hybrid vehicles without mentioning a time limit seems incompatible with the phase-out of fossil fuels, unless you dedicate a substantial amount of land to the production of biofuels.

And in the absence of reduction objectives for car use, vehicle size and fleet size or the development of adequate decarbonised hydrogen production capacities - used for industry, aviation and road freight - this appears extremely ambitious.

Le Pen has mentioned that she wants to make “everyday trains” a priority but, again, without explaining the idea (except when it comes to young people, who would benefit from free travel during off-peak hours). At the same time, she is in favour of lowering road charges, which conflicts with the objective of a shift towards rail…so it’s all very confusing.

Is her environmental programme up to scratch?

Le Pen’s programme is greener than ever. Nevertheless, beyond the buzzwords, her proposals fail to provide any concrete strategy to achieve the policies and fail to give any target for emission reductions - nor public governance to monitor the process.

Many crucial elements to the green transition are not adequately addressed, such as land use (forestry and the sea are mentioned as “major national priorities'' without any target nor roadmap), waste management, circular economy or the supply chain of raw materials for low and zero emissions technologies.

And even more worryingly, important aspects of the economy are not mentioned at all, like the emissions resulting from agriculture or education and training for the jobs of tomorrow, as well as the question of upskilling workers.

Finally, while Le Pen is betting on breakthrough technologies for a sustainable and resource-efficient economy, she never refers to the existing processes which allow for emission reductions already. For example, energy saving and efficiency policies.

Although Le Pen’s ecological programme is ‘greener’ than her previous ones, should she be elected, it will fail.

So, two points appear crystal clear. Although Le Pen’s ecological programme is ‘greener’ than her previous ones, should she be elected, it will fail.

She will not be able to meet France’s climate objectives under the Paris Agreement.

As for Macron’s own green agenda, it’s definitely preferable, though largely insufficient. Now, the question is, what will happen to the climate if Le Pen makes it into office? The future looks grim from the outset.