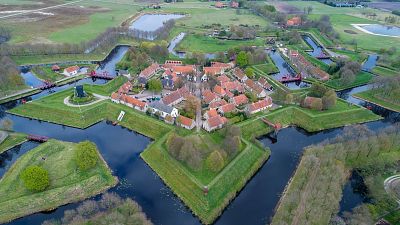 Bourtange is a village in the Netherlands, situated in the Westerwolde region in the east of Groningen.   -   Copyright  Canva
By Sarah Tekath  •  Updated: 12/10/2021

In anticipation of the upcoming COP26 conference taking place in early November 2021, the topic of hydrogen, especially green hydrogen, is becoming more and more talked about.

Especially in the Netherlands, where the government has been officially taken to court by environmental organisation, Urgenda. In December 2019, the court ruled that the government must cut its greenhouse gas emissions by at least 25 per cent by the end of 2020 compared to 1990 levels.

Hydrogen could be the solution the country is looking for. Currently, it is considered an important alternative to fossil energy with numerous possibilities of use in industry and mobility but also heating in the private sector. This basically means hydrogen can do everything that oil, coal and natural gas have been used for up until now - without releasing CO2.

However, hydrogen cannot automatically be considered sustainable. Grey hydrogen is obtained from fossil fuels with a large amount of CO2. At the moment, its production in the Netherlands results in 13 megatons annually, according to the government.

Only green hydrogen is produced in a sustainable way, based on renewable sources such as wind or solar energy. 'Green' hydrogen is crucial to a 'green' energy transition.

Only green hydrogen is produced in a sustainable way, based on renewable sources such as wind or solar energy.

Unfortunately, its production is also more expensive than grey hydrogen and requires a larger amount of electricity.

But clearly things need to change. According to the International Energy Agency's (IEA) latest report, the current hydrogen strategy is not ambitious or sustainable enough.

Experts discussed how to put this into action at the recent World Hydrogen Congress in Amsterdam, the Netherlands, an event with 1500 attendees from the world of clean hydrogen.

In order to use up natural resources in the Netherlands (mostly wind and water energy) several hydrogen projects have been launched in previous years, like large, off-shore wind parks in the North Sea.

But the area surrounding Amsterdam, with Schiphol airport, the port and steel company Tata Steel in IJmuiden, needs to be looked at urgently. Tata Steel in particular has received plenty of negative publicity recently, as the biggest polluter of the Netherlands with annual CO2 emissions of 12.5 megatons.

Now, a hydrogen hub should help - a network of big players in industry and mobility in the area will be sharing a hydrogen network to reduce their emissions.

Alderman Victor Everhardt of Economic Affairs for the City of Amsterdam announced the launch of the Hydrogen Hub at the congress. This will be an Amsterdam North Sea Canal Area where major companies are joining forces to accelerate the hydrogen energy transition.

“It is our initiative to create a hydrogen hub in this region, in cooperation with industrial and governmental parties. Previously, there have already been a lot of individual initiatives, but what we have done now is to connect them to create an ecosystem,” says Ingrid Post, Director Energy Transition North Sea Canal Area.

The largest wind park in the world

A big player in the Dutch hydrogen industry is Vattenfall, currently constructing the largest wind park in the world in the North Sea.

“We want to produce hydrogen in a clean way and that’s only possible when there is enough wind electricity available,” says Ruud Stevens, Hydrogen Project Manager of Vattenfall.

“The green hydrogen energy that Vattenfall is producing is intended to be used for industry or heavy road trucks to facilitate their decarbonisation,” Stevens told Euronews Green.

The steel company switching to hydrogen

Right in time for the congress, it was announced that the steelmaking company Tata Steel has plans to switch from using coal to hydrogen.

First, however, the company plans to partially convert to natural gas instead of coal by 2030. Even though natural gas has a higher efficiency than coal, it is still problematic for the environment due to its high CO2 emissions. But it is a necessary step in between the two phases, as at this point there is not a sufficient amount of hydrogen available for Tata Steel and the infrastructure isn't available either.

One of their two blast furnaces will be replaced by electricity-based installations by then. This way, about 30 per cent of the CO2 emissions Tata Steel produces will be reduced.

It is not yet known when the second blast furnace will be replaced. But Tata Steel states that it intends to switch completely to hydrogen by 2050.

Hydrogen refuelling stations are being set up in the Netherlands

But hydrogen is not only being used for manufacturing. When it comes to passenger cars, another big player is cropping up: Shell.

Oil giant Shell is often attacked by environmental protection organisations for its dominance in the fossil fuel industry. One organisation even took Shell to court in May 2020, ruling that the company needs to reduce its CO2 emissions by at least 45 per cent by 2030.

The location in Hoofddorp, near Amsterdam, is meant for passenger cars as well as trucks.

“Currently, there are three of them in the Netherlands,” says Paul Bogers, Vice President of Hydrogen of Shell. Despite the small number of hydrogen refuelling stations, Shell has already taken learnings from them.

“The sites that we are building now already have twice the capacity and they are half the cost.”

It is sometimes argued that the use of hydrogen for private passenger cars is not an ideal solution, unlike electric cars, mostly due to the short distances you can drive and a lack of access to charging stations.

However, Shell has seen an opportunity to introduce hydrogen into the sector of public transport in Groningen.

Buses in the province of Groningen, connecting villages together, are often located far away from each other. So in cases like this, hydrogen is a good solution, Bogers told Euronews Green.

And in the future, vehicles at Schiphol Airport will also run either electrically or on hydrogen. This is part of the Royal Schiphol Group's plan to make Amsterdam Airport emission-free by 2030.