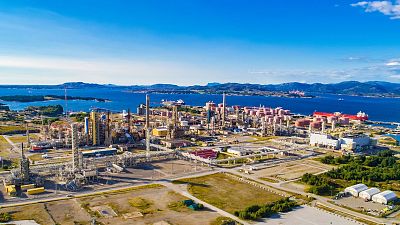 Did you know that Russia is not the world’s biggest gas producer? It actually comes in second after the US.

However, the European Union relies most heavily on Russia for its imports, meaning it near single-handedly props up our energy markets.

The bloc has decided to cut ties following Russia’s invasion of Ukraine, by phasing out gas exports by two thirds before 2023. But the EU is grappling with the idea that it will now have to source its energy elsewhere.

On the flip side, Russia is similarly dependent on the EU. According to consultancy Thunder Said Energy, Russia’s total exports in 2019 valued $425 billion (€387 bn), with gas making up a sizeable 13 per cent. Over $50 billion (€45 bn) of gas exports head to Europe from Russia, making it by far the biggest client for Russian firms, based on an analytical report by the Tony Blair Institute for Global Change.

So Russia relies on us too. But it is clear that curbing the EU dependency will be a struggle, and energy decisions taken in the next weeks and months have serious repercussions for the planet.

Which countries can we work with to make up for the losses? And, more pressingly, could a shift to renewables replace gas altogether?

Which countries could the EU import gas from?

At the moment, there are a few countries on the table, but the jury is out as to whether they would all be viable.

According to the Tony Blair Institute’s report, what the EU is facing is a medium-term problem. In the short term, it has the reserves and capability to manage the loss of Russian gas. And longer term, EU countries should transition to a more diversified portfolio of energy sources, namely renewables.

So who can we import from in the medium-term?

The USA could provide us with LNG

The US government recently voiced hesitations around exporting more fossil fuels to Europe, due to climate concerns.

"We've got the ability to do more, the desire to do more," he said, estimating that the US has the potential to quadruple its gas output by 2030.

Liquid natural gas (LNG) is produced in huge quantities in the US and could help Europe in the medium term. Last month, Europe was ranked the top importer of US LNG for the third month in a row, taking up nearly three-fourths of exports, according to Reuters.

A 2019 analysis showed that almost three quarters of the EU's imports of natural gas come from Russia, but 16 per cent come from within the bloc - in Norway. So could Norway provide more, now that Russian gas is off the cards?

Norway could allegedly increase gas exports to the continent by between 15 billion and 30 billion cubic metres by end of year, according to exclusive insights by the oil and gas industry publication Upstream.

The Aker BP-operated Skarv field in the Norwegian Sea has been mentioned as a possible candidate for increasing gas production. There is also potential for more liquified gas to be exported from the Hammerfest LNG facility in the north of the country.

However, there are still limitations. Upstream’s government sources say Norway’s gas production is close to its maximum, under current regulations, as existing pipeline capacity might not be able to handle an increase.

Algeria is working closely with Italy

Algeria is ready to send more natural gas to the European Union, a Spanish government minister told Bloomberg. The aforementioned 2019 report tells us that 8 per cent of the EU’s gas imports already come from the north African country.

Qatar may be our last resort

Qatar, one of the world’s top LNG producers, has said that no single country can replace Russian supplies to Europe, with most volumes tied to long-term supply contracts.

But it could be encouraged to help out in the medium term. Any attempt by Doha to help the Europeans to diversify their sources of natural gas or compensate for shortages of Russian gas "will undoubtedly bring some economic and political benefits", according to the non-profit The Middle Eastern Institute.

While Doha doesn’t have enough available volumes of LNG to export more to Europe, it is keen to step in when called upon - something it already demonstrated in 2021. Last year, Qatar delivered extra LNG to the UK, which was initially destined to go to Asia, to help the British government meet existing demand. Doha was offered “supplier of last resort” status, as a reward.

And according to a gas analyst with S&P Global Platts, James Huckstepp, Qatar could still play an important role if it defers planned maintenance works in order to maximise supply.

Angola's pipelines could be put to good use

Oil and gas giants BP and Eni have just signed an agreement to form a new 50/50 independent company in Angola. And BP is now close to selling its stakes in two major gas ‎developments in Algeria to Eni, says Reuters.

​​This change of ownership at the two gas plants in the south of Algeria will help Eni develop Algeria's energy infrastructure and export gas to southern Europe via pipelines, say sources.

Italy is the main European nation leading the way when it comes to cooperation with Angola. Foreign Minister Luigi Di Maio travelled to the African country with the head of energy group Eni, Claudio Descalzi, over the weekend to discuss their options.

“Algeria, Qatar, Congo and Angola, have given their availability to increase the quantities of gas,” Di Maio told state-owned television RAI in an interview.

In the long-term, we must move towards renewable energy as a planet - if we want to curb catastrophic climate change. And without a plan in place, net-zero and decarbonisation pledges could be left by the wayside in the immediate rush to ensure more energy security.

There’s plenty of scope for building out the renewables sector, in particular through the EuroAsia and EuroAfrica (electricity) Interconnectors in the Eastern Mediterranean, according to the report by the Tony Blair Institute for Global Change.

Decarbonisation pledges could be left by the wayside in the immediate rush to ensure more energy security.

The EU should be pushing forward with its existing plans to increase renewables targets and limit its overall reliance on all gas, not just from Russia. For example, Italy has just announced it is building six new wind farms in a bid to move away from Russian gas dependency.

“Leaders should take Russian aggression as a much-needed warning sign that countries need to diversify away from fossil fuels, not just for environmental reasons but for geopolitical ones too,” concludes the report.