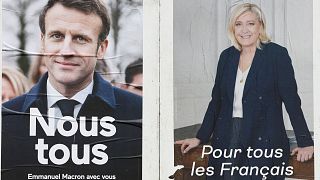 “A defeat for the climate and the environment.”

That’s how Greenpeace epitomised the vote that made Emmanuel Macron and Marine Le Pen the frontrunners in the French presidential race.

One could assume this bothers France’s voters who have said in polls that, alongside the cost of living, climate change is one of their most important issues.

But that priority didn’t translate to the polling booth where Yannick Jadot, France’s Green party (EELV) candidate, only managed 4.6 per cent of the vote.

So now that it’s down to two candidates, what’s in store for France’s climate and environment?

With just a few days to go in the race, we take a closer look at the candidates’ environmental policies.

What are the French presidential candidates’ climate policies?

Current president Macron and far-right candidate Le Pen have both committed to the 2015 Paris Agreement to limit global warming to well below 2 degrees, but their approaches differ - particularly on energy.

As Europe’s second-biggest economy, the direction of France’s climate policy could reverberate right across the EU, potentially putting a damper on climate targets.

After marginally beating Le Pen in the first round, Macron has been trying to win over left-leaning voters in the final days of campaigning with what he’s called a “complete renewal” of his climate policy.

He has vowed to build up to 14 nuclear reactors by 2050 and regenerate existing plants. France currently relies on nuclear power for about 67 per cent of its energy and around 6.7 per cent of France’s industrial workforce are employed in the sector.

Le Pen meanwhile would build 20 nuclear plants and aim to have nuclear power provide 81 per cent of France’s energy by 2050. The remaining 19 per cent would be covered by hydropower, hydrogen, solar and bioenergy.

But nuclear power plants are expensive and take years to complete, so critics say neither candidate’s plans move fast enough to reduce emissions.

On renewables, Macron has committed to set up 50 offshore wind farms, increasing solar panels tenfold and naming a new minister for energy.

Unlike some of her far-right counterparts in the US and elsewhere, the National Rally leader is not a climate denier and, on paper, supports lowering emissions.

That said, she is fiercely against renewable energy, calling wind turbines "horrors that cost us a fortune." She would end all subsidies to the solar and wind energy sector, stop more being built and dismantle already existing turbines.

This is despite wind power supplying around 8 per cent of France’s power and worldwide investments in this form of energy having increased 50 per cent between 2019 and 2020 alone, according to the Global Wind Energy Council.

A critic of the European Union, Le Pen has rejected the EU’s Green Deal, saying it’s too restrictive and that she’d prefer to allow “France to respond to [the Paris Agreement] in the way it chooses.”

She is pushing “localism" and wants 80 per cent of food in French school dinners to be sourced from French farms.

Le Pen has also vowed to slash VAT on petrol from 20 per cent to just 5.5 per cent, rapidly reducing prices at the pump. When Macron tried to increase fuel taxes in 2018, the “Yellow Vests” protests erupted and forced him to back down.

What happened in the last debate?

During Wednesday evening's penultimate debate, Le Pen said at the outset that "another choice is possible" and claimed she would be "president of everyday life", as her opening statement.

Macron, by contrast, began by vowing to "take hold of the environmental question" and to "make Europe stronger".

But as the debate continued, Le Pen soon accused the incumbent president of being a "climate-hypocrite", while she in turn was described by her rival as a "climate-sceptic".

Le Pen even sarcastically suggested that the president wanted to install wind farms everywhere except the north coast resort of Le Touquet - where Macron has a second home.

"You're serious?" was his retort.

What do France's climate campaigners say?

An analysis of election campaigning by environmental activist group ‘The Issue of the Century’ found that only 5 per cent of air time has been devoted to discussions on climate.

The UN's Intergovernmental Panel on Climate Change (IPCC) said earlier this month that the world has to halve emissions in order to meet the goal of limiting warming to 1.5°C.

Macron has already failed to meet that target. Last year, a French court found the government guilty of climate inaction, saying it had not done enough to meet its goals to reduce greenhouse gases.

Climate groups say that neither Macron nor Le Pen’s policies would put France on the path to net zero emissions.

In their Twitter thread following the first round vote, Greenpeace wrote:

The Climate Action Network (Réseau Action Climat), a union of 26 climate and social justice groups, rated all the presidential candidates’ proposals on climate ahead of the elections.

It gave both Macron and Le Pen an overall negative rating, saying their plans did not meet the network’s climate values and would fail to adequately reduce emissions.

The network’s report described Macron’s plans as “vague, incomplete and imprecise,” and Le Pen’s as “a climatic step backwards.”

All the new oil and gas projects approved since IPCC report