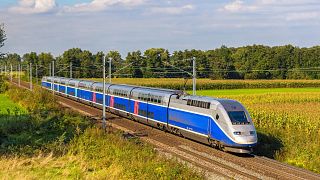 Buying a train ticket to cross Europe can be a costly nightmare.

Any customer who’s bought a cross-border train ticket knows the dilemma: is it worth the high price and long journey? Especially when plane travel seems so much quicker and cheaper.

With this in mind, it’s not surprising that just 7 per cent of the distance travelled by land in the EU is by rail. What is surprising though, is that public perception is wrong: train tickets aren’t actually more expensive than plane tickets.

In fact, “one can save an average of 37 per cent by taking a train instead of a plane,” a recent study by the International Union of Railways states.

So why aren’t trains more popular in Europe?

While the situation is complex, it can be boiled down to three main factors.

Rather than a well-oiled grid, the European railway network is an “ineffective patchwork of national lines,” says Josef Doppelbauer, executive director of the European Railway Agency (ERA).

“Let's say here in France with SNCF, when you say you want to invest more into cross-border, the usual answer is 95 per cent of our traffic is national”, says Doppelbauer.

“This would prompt companies to seal off their markets against each other instead of cooperating, despite there being “a huge potential”.

The EU has tried to break national monopolies and foster market competition by implementing a so-called “wheel and track” separation.

This means separating railway infrastructure from train operators. And while this method did appease competition concerns, it has its drawbacks too: “the disadvantage of this separation is that we lost in efficiency and increased transaction costs,” says Alberto Mazzola, director of the Community of European Railways and Infrastructure Companies (CER).

A consequence, he says, that is especially visible along busier rail tracks: “The higher the traffic, the more difficult it is to manage if there are no integrated infrastructures.”

2. A historical lack of cross-border coordination

In 2018 the European Court of Auditors pointed out the problem of opaque track access charges, which are set by infrastructure managers and differ across Member States.

According to Doppelbauer, this is just one of the many consequences of a lack of technical standardisation. National companies are known to order trains which are only compatible with their national railway networks. This often forces cross-border trains to switch locomotives when travelling into a different country, increasing travel journey durations for customers.

Another example is the absence of a uniform control and signalling system (ERTMS). ERA reports having reduced 14,000 national rules down to less than a 100 since 2016, but recently efforts have stalled. Finding a common ground and unifying the remaining national laws is harder, says Doppelbauer.

The lack of unification goes beyond the physical world and reaches the digital realms of ticket purchasing sites too. Although some privately owned websites already facilitate the sale of cross-border train tickets, the process usually requires customers to sift through different national rail websites.

Customer rights are the most important

Even after the purchase, passengers travelling on various national companies are not guaranteed their connection if the first train from a different railway company is running late.

When it comes to improving the service, “customer rights are the most important”, says Lorelei Limousine, the EU climate and transport campaigner at Greenpeace.

Despite decades of underinvestment, in the past two years Europe’s railway system has seen a political shift, accompanied by an increase in funding for railway infrastructure. “For the first time since the Second World War, countries like Germany are investing more in rail than in road”, says Mazzola.

EU investment has attracted some criticism from the European Court of Auditors, however.

High-speed train connections are a good example of the complexity of European investment.

The CER has set its hopes on creating high-speed connections between all major European cities. They expect that decreased journey durations will motivate more people to travel by train.

Yet, as the EU auditors pointed out in their 2018 special report, “cost-efficiency is at stake, because high-speed lines are not needed everywhere”.

Alternative options, such as improving already existing lines, “[are] not often given due consideration.” And despite a pick up in funding, the future challenge is finding “ a sustained investment”, says Mazzola.

Railway companies also face heavy taxation, with VAT still paid on many cross-border train tickets. This is particularly “unfair”, states Doppelbauer, because other transportation sectors, notably the aviation industry, benefit from an exemption from this and other EU taxes such as the kerosene tax.

Doppelbauer hopes the new tax revenue could be allocated to subsidise railway travelling. Activists share these hopes, but Greenpeace campaigner Limousine is cautious: “In the past EU governments have really been reluctant to tackle emissions from the transport sector,” she says.

A vote on the reform is scheduled for June 2022.

Are we finally changing tracks?

At the end of 2021, and in an effort to curb carbon emissions, the European Commission presented an Action Plan to boost passenger rail journeys and proposed changes to the Trans-European Transport Network (TEN-T) to reduce travel time.

“The action plan”, says Limousine, “looks promising but we need to wait and see the concrete legislative proposals to see if there is an actual change”.

The citizen interest is certainly there. The majority of the European population would be in favour of banning short-distance flights at an EU level and taking the train instead, as many environmental groups are demanding.

According to an OBC Transeuropa report commissioned by Greenpeace, one-third of short-haul flights in the EU have train alternatives under six hours. Just banning these would save 3.5 million tons of CO2e per year.

National railway companies have been reached out to for comment but failed to reply.