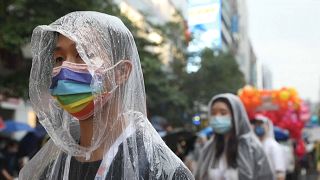 Some 3,000 people participated in South Africa's LGBTQ Pride Parade on Saturday, the country's first after celebrations were cancelled for two consecutive years due to COVID-19 restrictions.

Some 3,000 people participated in South Africa's LGBTQ Pride Parade on Saturday, the country's first after celebrations were cancelled for two consecutive years due to COVID-19 restrictions.

However, officials in the US had warned of a possible terror attack in Johannesburg's Sandton district, an upmarket suburb in the capital.

Despite the warning, the festivities went ahead under a large police presence while officials in South Africa advised attendees that it would be safe to march.

South Africa's President Cyril Ramaphosa criticised the US for causing unnecessary panic without providing significant evidence to verify their warning.

"Up to this point, we do not have evidence on the table of the thing that has been said," he said.

In the statement, the government discouraged people from "sharing misleading information on social media platforms about terror attacks to avoid creating unnecessary panic and alarm."

South Africa became the first country on the continent to legalise gay marriage in 2006, however, activists say stigma and discrimination still continue.

Meanwhile, tens of thousands braved downpours in Taiwan on Saturday to celebrate as the island staged its first LGBTQ Pride rally since fully reopening its border.

Taiwan is at the vanguard of the burgeoning LGBTQ rights movement in Asia and became the first place in the region to legalise marriage equality in 2019.

Its capital Taipei hosts one of Asia's largest Pride marches annually -- except for last year when a surge in Covid cases forced the event online.

The festivity was back in full swing on Saturday as marchers donned eye-catching costumes and draped themselves in rainbow flags in Taiwan's 20th Pride march, with organisers estimating the turnout was 120,000.

"I'm so very excited to be a part of the first physical parade in two years," said 40-year-old service industry worker Wolf Yang, sporting a gold bodysuit with a matching sequined headpiece and nose ring.

A record crowd of 200,000 joined the 2019 Pride march to celebrate after Taiwan legalised same-sex marriages that year.

At least 7,000 same-sex couples have wed since then, although the law still contains restrictions that heterosexual couples do not face.

Under the current rules, Taiwanese nationals can only marry those from roughly 30 countries and territories where same-sex marriage is also legal.