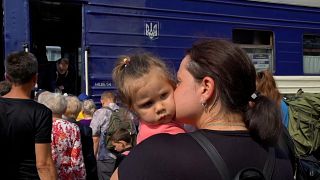 Hundreds of people evacuated from the Donetsk region in Ukraine

Hundreds of people are evacuating by train from the Donetsk region of eastern Ukraine, as authorities urge everyone to leave the part of the country that has been the scene of violent clashes with Russian troops.

On the outskirts of Kramatorsk, which has been under frequent Russian shelling, volunteers have set up a collection point to gather evacuees who are then transported to the nearest functional railway station in Pokrovsk, 85 kilometres to the southwest.

Trains set up to transport all the evacuees headed west to the city of Dnipro.