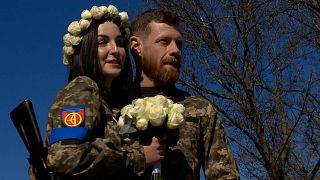 On Thursday 7 April, Anastasia and Vasislav, two members of the Ukrainian Defence Forces, were married on Kyiv Hill. They met five years ago and have been together for two years.

A few months ago they were a normal couple living in the Ukrainian capital, but with the Russian invasion of their country, they decided to become civilian volunteers in the army.

The bride and groom wore camouflage outfits marked with the characteristic yellow stripe of the Ukrainian army.

They laid down their weapons for a moment to get married, a decision made overnight, not knowing where they would be in the coming weeks.