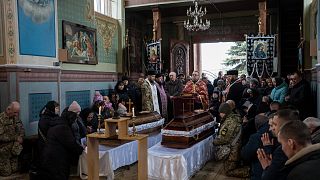 The mourning began with a pair of caskets, one open, one shut. Lined in white fabric, they held two of the Ukrainian fighters killed in Russia's invasion.

Here, in a gray village under a gray sky near the border with Poland, they were the first reminder that the war could come this far.

The men were killed Sunday when Russian missiles struck a military base in nearby Yavoriv, a crucial center of military cooperation between Ukraine and NATO countries. At least 35 people died in all.