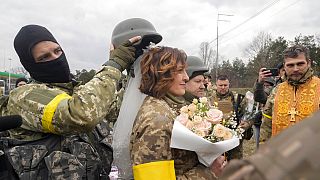 Lesya and Valeri tied the knot at a checkpoint at one of the entrances to the city as the Russian invasion entered its 11th day.

“They have been living in a civil marriage for a long time, and now they have decided to get married,” Klitschko said on social media.