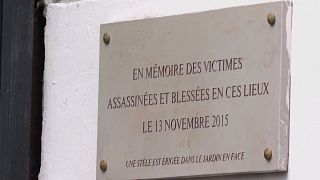 French prime minister Jean Castex and the mayor of Paris Anne Hidalgo laid flowers' wreaths outside the Bataclan concert complex and Stade de France football stadium on Saturday as the country marked six years since the gun and bomb attacks in the French capital.

After US Vice President Kamala Harris, accompanied by her husband Douglas Emhoff, lays a bouquet of white flowers in front of the bar Le Carillon in Paris in memory of the victims of the Novembre 13, 2015 terror attacks, the worst in France's post-war history.

The anniversary comes with renewed focus in France, amid a trial into the November 2015 Paris attacks.