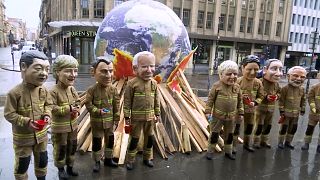 Activists on Friday posed as world leaders incapable of putting out the fire as the planet burns.

Dressed as firefighters, the mock world leaders did little to tackle the climate crisis and to save a planet "on fire".

Negotiators at this year's UN climate talks in Glasgow appeared to be backing away from a call to end all use of coal and phase out fossil fuel subsidies completely, but gave poor countries hope for more financial support to cope with global warming.

The latest draft proposals from the meeting’s chair called on countries to accelerate “the phaseout of unabated coal power and of inefficient subsidies for fossil fuels.”

A previous proposal Wednesday had been stronger, calling on countries to “accelerate the phasing out of coal and subsidies for fossil fuel.”

While the chair’s proposal is likely to undergo further negotiation at the talks, due to end Friday, the change in wording suggested a shift away from unconditional demands that some fossil fuel exporting nations have objected to.