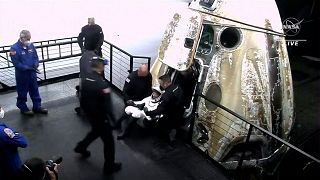 A SpaceX capsule landed off the coast of Florida Monday carrying four astronauts who had spent six months on the International Space Station, a NASA live broadcast showed.Slowed by the Earth's atmosphere, as well as four huge parachutes, the Dragon capsule was able to withstand the dizzying descent thanks to its heat shield. A boat will retrieve the capsule, and the astronauts on board will be brought back to land via helicopter.