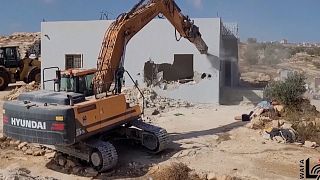 Israeli forced razed a Palestinian house in Aj-Juwaya community, east of Yatta in the southern West Bank district of Hebron.

He clarified that the demolitions, in addition to other restrictive measures against the community are designed to displace the population and to make room for the expansion of the nearby colonial settlement of Ma'on.

Masafer Yatta is a collection of almost 19 hamlets which rely heavily on animal husbandry as the main source of livelihood. It has been designated as a closed Israeli military zone for training since 1980s and accordingly referred to as Firing Zone 918.

Dozens of refugees and migrants protested outside the refugee camp of Eleonas in Athens.

Protesters held placards and chanted slogans protesting about food quality in the camp and delays in processing asylum applications.

They also demonstrated against the decision by the Athens Mayor to close the camp down and move them to other camps.