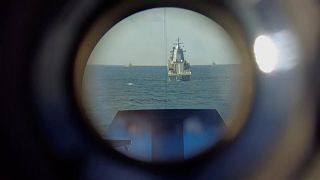 Russia and China continued naval drills in the Sea of Japan after an incident between Russian and US warships.

Russia's Defense Ministry said a Russian warship on Friday prevented a U.S. Navy destroyer from what it described as an attempt to intrude into Russia's territorial waters.

The incident came as Russia and China conducted joint naval drills in the area, and followed other dangerously close encounters involving Russian and Western warships.

Russia, the U.S. and its NATO allies have frequently accused each other of dangerous and provocative maneuvers at sea and in the air as Russia-West ties have been hit by Moscow's annexation of Crimea, accusations of Russian interference with elections, hacking attacks and other tensions.