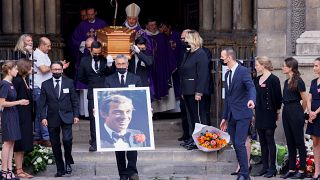 The star of the iconic French New Wave film "Breathless" died at 88 years-old. His death jolted the country into mourning for the man whose crooked boxer's nose and rakish grin made him one of the country's most recognizable leading men.

The outpouring of national grief has reflected Belmondo's prominent role in France's cultural world and in its living rooms, where families gathered around his old films.

Hundreds of fans crowded outside the church and cheered as famous French actors Alain Delon and Jean Dujardin, as well as other luminaries of the French cinematic world, arrived on the square and entered the church.

And his fans applauded as Belmondo's coffin was driven away.

This private ceremony follows the official one led by President Emmanuel Macron, inside the courtyard of Les Invalides.