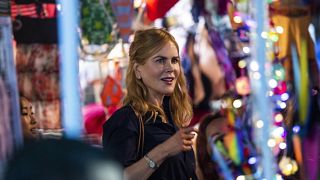 Hollywood star Nicole Kidman was spotted in Hong Kong filming a new TV series after a recent backlash over having quarantine exemption to work in the city.

Kidman, who reportedly flew to Hong Kong from Sydney, was spotted in the city's famous Fa Yuen street, known for its night market, on 23 August 2021. The star is filming a new Amazon Prime Video series "Expats," according to media reports.

The government said in a statement that it had granted the exemption "for the purpose of performing designated professional work."

It said the work was "conducive to maintaining the necessary operation and development of Hong Kong's economy."

Kidman's exemption comes as the Hong Kong government has tightened entry requirements for travelers, adding 15 countries including the U.S. to the high-risk category and requiring vaccinated travelers from medium-risk countries to spend 14 days in quarantine.

Previously, those traveling from medium-risk countries could quarantine for just seven days in a designated hotel if they had a valid vaccination record and a positive COVID-19 antibodies test.

Authorities say Kidman is obliged to comply with virus rules in Hong Kong, and is required to submit an itinerary and travel in a private vehicle to avoid contact with the public.

"With this exemption, it doesn't mean that she can go anywhere she wants," Edward Yau, Hong Kong's secretary for commerce and economic development, said last week.