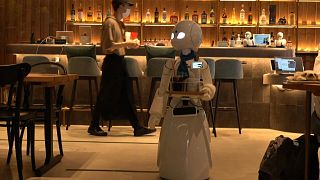 At a Tokyo cafe, Michio Imai greets a customer, but not in person. He's hundreds of kilometres away, operating a robot waiter as part of an experiment in inclusive employment.

Dawn cafe's robots are intended to be more than a gimmick, offering job opportunities to people who find it hard to work outside the home.

"Hello. How are you?" a sleek white robot shaped like a baby penguin calls from a counter near the entrance, turning its face to customers and waving its flippers.

Imai is behind the controls at his home in Hiroshima, 800 kilometres (500 miles) away, one of around 50 employees with physical and mental disabilities who work as Dawn's "pilots", operating robot staff.

The cafe opened in central Tokyo's Nihonbashi district in June and employs staff across Japan and overseas, as well as some who work on site.

It was originally supposed to open last year to coincide with the Paralympics, but the opening was postponed by the pandemic -- just like the Games, which begin on Tuesday.

Around 20 miniature robots with almond-shaped eyes sit on tables and in other parts of the cafe, which has no stairs and smooth wooden floors large enough for wheelchairs.