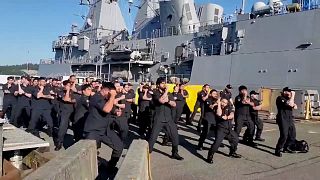 “Ehara tāku toa i te toa takitahi, engari he toa takitini – My strength is not as an individual, but as a collective,” the NZ Defence Force wrote in a caption to the footage.

The HMNZS Te Mana has been docked at Canada’s Pacific Coast Naval Base for the past two years, to receive a “frigate systems upgrade”, the navy had previously announced.

It said that the arrival of new crewmates on Monday, marked the “first time Te Mana has had a full ship’s company since she left Aotearoa two & a half years ago for her Frigate Systems Upgrade.”

Video shows the crew onboard the vessel, welcoming new arrivals with a traditional haka.