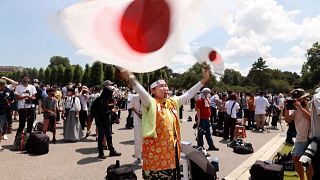 A Tokyo Olympics spectator ban means superfan Kyoko Ishikawa will miss her first Summer Games since 1992 -- so instead she's turning her home into a flag-waving, whistle-blowing virtual stadium.

The 51-year-old businesswoman is determined not to let coronavirus spoil the fun as the Games land in her home city, despite organisers banning fans from most events.

She'll put on her signature high-energy performance, cheering and chanting in a traditional Japanese outfit, as she watches on TV in the comfort of her home.

And she won't be alone as she leaps around her living room, which is decorated with memorabilia picked up on her globe-trotting Olympic adventures.

She plans to connect with fans around the world on live conference calls and social media, convinced the Games can bring people together even during a pandemic.

"It's the same this time. Whatever the method, that fundamental principle doesn't change."

Ishikawa's Olympic obsession began on a 1992 backpacking trip to Barcelona, where she managed to buy a ticket to the opening ceremony and was blown away by the atmosphere.

But her hopes of watching the Tokyo Games were dashed when organisers announced that practically all events would take place behind closed doors because of virus fears.

Ishikawa had a ticket to watch wrestling and was hoping to pick up more as the Games drew closer.

She won't be able to do that now, but she sees the fan ban as an opportunity for a new experience.

She plans to learn about athletes' countries through maps and books as they compete, and sample food and drink from around the world over the course of the Games.