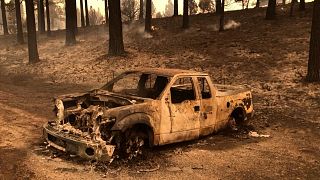 A rapidly growing wildfire south of Lake Tahoe jumped a highway, prompting more evacuation orders and the cancellation of an extreme bike ride through the Sierra Nevada on Saturday as critically dangerous wildfire weather loomed in the coming days.

The Tamarack Fire, which was sparked by lightning on July 4, exploded overnight and was over 32 square miles (82 square kilometers) as of Saturday evening, according to the Humboldt-Toiyabe National Forest.

The blaze was threatening Markleeville, a small town close to the California-Nevada state line.

It has destroyed at least three structures, authorities said, and was burning toward the Alpine County Airport after jumping a highway.

A notice posted on the 103-mile (165-kilometer) Death Ride's website said several communities in the area had been evacuated and ordered all riders to clear the area.