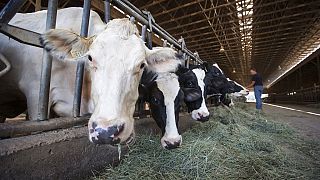 The controversy over a trade deal between the UK and Australia centres around how much access it would grant Australian farmers to the British market, an expert has told Euronews.

It comes amid reports London wants to tie up the agreement by early June.

The National Farmers Union says the deal would jeopardise the UK's farming industry and "could cause the demise of many, many beef and sheep farms".

Sam Lowe, a senior research fellow at the Centre for European Reform, an independent think-tank, told Euronews that the debate at the heart of the UK government is about how much access Australia should be offered.

"The big controversy is how much access to offer Australian farmers.

"Some in Cabinet [UK senior ministers] would rather that it [access] was limited, so the UK's offer was something called "tariff-rate quotas", which limits the amount of product that could come in tariff-free.

"Other parts of government would like duty and tariff-free trade, so zero tariffs, albeit phased in over a long period of time, 15 years.

"It seems the group that wants quota-free trade has won the day and I suppose the reason for that is that they need to get this done quickly.

"They want to get it done before the G7 (in June). While it could be possible to negotiate some slightly reduced rates, that would mean negotiations would drag on longer, as have the EU and Australian negotiations over exactly the same issue."

The UK's deal to leave the European Union took effect on January 1, 2021. London has agreed on deals to continue trading as normal with scores of non-EU countries, previously governed by the UK's membership of the bloc.

Asked why, from an environmental perspective, London was seeking a trade deal with a country so far away, Lowe responded: "You have to put it in the broader context of the UK leaving the European Union and this government's desire to be a bastion of free trade globally. And in that context, a trade agreement with Australia is a priority, along with another trade agreement with New Zealand.

"And I suppose there's a feeling in (the UK) government [that] if they can't get these ones done, that it might be quite difficult to get anything done in future. So I fully expect this to be concluded in the next couple of weeks."

**Watch the full interview in the video player, above. **