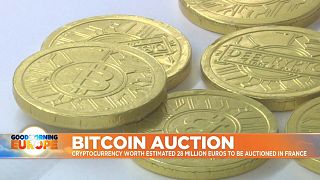 French government auctions off €28 million worth of Bitcoin

The French government is set to auction off on Wednesday millions of euros worth of the cryptocurrency Bitcoin that were seized from hackers in 2019.

The auction, being held on behalf of the French Agency for the Recovery and Management of Seized and Confiscated Assets, is the first of its kind in France.

The tokens were seized from individuals linked to the GateHub trading platform hack.

The auction is expected to raise around €28 million.

Bitcoin crossed the $60,000 (€50 195) mark for the first time in its history on Saturday with analysts linking the cryptocurrency's rapid climb in part to the passing of the US stimulus plan.

Yves Benaim, the founder of 2B4CH Swiss think tank for currencies, told Euronews the government's decision to sell it now is telling.

“Technically the French ministry is allowed to sell something that has been seized if they think the value might go down," he explained. "It’s interesting that they are selling it now, betting that the price will go down, that it was just a bubble."

“Bitcoin are now worth about €50,000 each," Benaim added. "It is interesting that they are starting the auction at 40% to 50% of the market price, so some people will be very interested in buying just to be able to sell straight away.”

Watch Euronews's full report in the above video player.