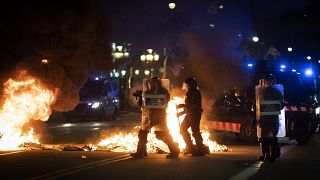 Protests break out in Spain over arrest of anti-monarchy rapper

Police in Spain say 14 people were arrested in violent street protests in several cities following the arrest of Spanish rap artist Pablo Hasél, who had barricaded himself at a university with dozens of supporters to avoid prison and defend his fight for free speech.

Emergency services said Wednesday that 33 people were treated for injuries in the disturbances.

In the northeastern city of Barcelona, thousands of protestors set rubbish bins on fire and threw rocks at the police. Several stores and a bank were damaged amid chaotic scenes on one of the city’s main streets. Spanish National Television cited city authorities as estimating the damages at 70,000 euros ($84,000).