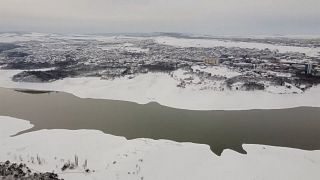 Heavy snowfall left various regions in Russia and in Crimea blanketed in snow.

Roads at the border with Georgia were blocked due to a risk of avalanche.

Moscow was blanketed with snow on Saturday after a record-breaking blizzard in central areas of Russia.

About 13,000 snow blower vehicles are taking part in clearing snowdrifts in Moscow, according to the Russian Emergency Ministry.